Together with his family George (Alexandre) O'Kelly moved to Paris in the mid-1830s. Nothing is known about his musical education, but it can be taken as a given that he received his first tuition from his father, probably complemented by advanced studies with other teachers. His earliest public record is his membership of the Association des Artistes Musiciens, where he is listed in the annual membership lists for 1847-52. For the last three years he was employed at the Théatre Historique, predecessor of the Lyrique, but around 1852 he returned to Boulogne-sur-mer to teach piano, and stayed there for almost 30 years until around 1880 when he again moved to Paris. At Boulogne, there are records of an orchestral overture performed in 1853 and 1858, a piano concerto (1871), and a choral cantata on the occasion of the laying of a foundation stone to the deep-sea harbour of Boulogne (1878). He also wrote at least two one-act comic operas, one is Une Nuit au bal (performed on 24 Dec. 1853) and the other Le Lutin de Galway (performed on 9 and 12 September 1878), both performed in the theatre of his hometown. The latter has a plot based in 18th-century county Galway (Ireland), and it has so far been wrongly attributed to his brother Joseph.

Although he was less prolific than his brother, George was able to publish a number of songs (some to his own words) and piano pieces, the last ones being easy pieces published in educational journals for young ladies and children. So far I have identified more than 40 compositions (see attached list of works).

About four years after his return to Boulogne, George married Caroline Mégret in January 1856, a woman who was 11 years older than him and a widow with two sons from her previous marriage﻿ aged 7 and 6. George and Caroline had two further children of their own, the older became a priest (abbé) and the younger moved to Paris. This line of the family survives into our own time. Sources suggest that after the death of his first wife in July 1884 George himself moved back to Paris, where he married again in October of the same year. However, when his niece Marie died in June 1881, he witnessed, and his address was registered as 2, rue Troyon, Paris (now in Sèvres). A year later when his son Charles married in Paris, his wife was mentioned as "actuellement en residence à Boulogne-sur-mer". This evidence suggests that he probably left his wife in or before June 1881, probably having eloped with another woman from Boulogne, because his second wife, Reine Caroline de Bosson, was also from this town. In 1884 he is documented as living in 47 rue des Acacias, by 1890 in 10 rue Guersant, and by 1904 in 23 rue Ruhmkorff (Feb) and 4 boulevard Pereire (June), all in the 17th arrondissement of Paris. When he died he was living in Asnières-sur-Seine, a Paris suburb, in the family of his grandson who had died in 1913. His granddaughter-in-law, Hortense Villiger, inherited a few examples of his published music which is how it came into the possession of the present members of the family who still live around Paris. 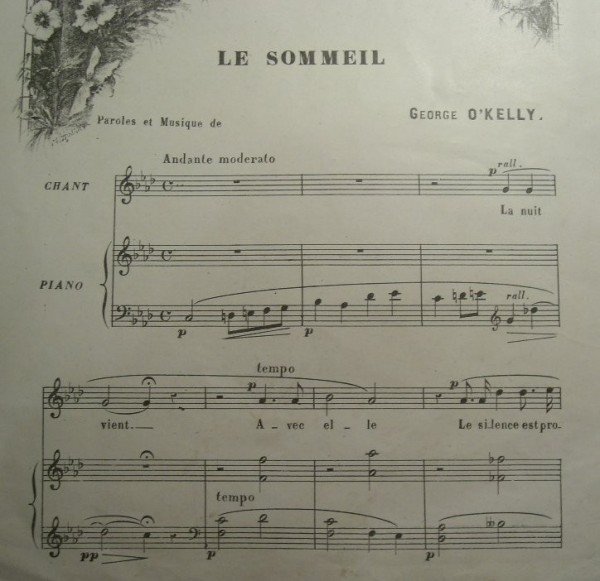