(Louis) Auguste O'Kelly came to Paris with his family in the mid-1830s. Nothing is known about his education and early career. He became a member of the Association des Artistes Musiciens as early as 1850, but what he did in the intervening years before he became a music publisher in 1872, is unknown. Since parallel to his publishing business he also sold pianos (see picture below), he may have worked with another publisher or another piano maker/dealer. The latter could have been Pleyel, because there was a relation at least to Joseph and Henri. At the birth of his son in October 1872, his profession was decribed as 'negociant' (dealer/trader), perhaps in pianos?

In May 1872 he took over the Paris publishing business 'Magasin de Musique du Conservatoire' at 11, rue du Faubourg Poissonnière in the 9th arrondissement of Paris from his predecessor Émile Cellerin (1869-70). This company had been founded initially in 1794 and had become relatively well-known while it was run by 'Mme. [Célèste] Cendrier' between 1841 and 1859. Since 1849, the business had operated from this address, but it lay vacant between 1860 and 1868 and again around 1871.

During 17 years of business until 1888 Auguste O'Kelly published about 1,500 pieces of music, mainly with plate numbers beginning with his initials 'A.O.K. ...' followed by consecutive numbering (see overview below). Some of his plate numbers don't use the A.O.K. sequence, but have initials of composers' names, still others don't have any number. He began by republishing most of the repertory of Cellerin and Saint-Hilaire (who had taken over the Cendrier catalogue in the 1860s). His own scores were mainly piano music and songs by contemporary French composers, most of them being young talents, but also some of the teachers at the Conservatoire. The best known name in O'Kelly's catalogue, from today's perspective, became that of Louis Moreau Gottschalk (1829-1869), when Auguste acquired the rights for the piano works from Léon Escudier at a public auction in March 1882 for 60,000 francs (most of the items between A.O.K. numbers 949 to 1029). There is also a small number of operas, chamber and choral music in his catalogue. In 1878 he won a bronze medal at the Exposition Universelle Internationale for his editions, the jury applauding his 'correct' editions, didactic works and his encouragement of young artists. Between 1879 and 1887 he also published theoretical treatises. As an independent appendix to my forthcoming book on the O'Kelly family I will publish a catalogue of Auguste's publications - as complete as I can possibly reconstruct. This will probably come as a pdf on this website.

For a time O'Kelly published his music in association with Naus (Paris, 1880-1) and Lissarrague (Versailles), and he also had a distribution arrangement with J. Rouget in Toulouse. In 1888, he sold his repertoire to Albert Noël who in 1895 sold parts of it to Ulysse T. du Wast who still called his business 'ancienne maison O'Kelly'. This was partly sold to Stéphane Chapelier in 1910, but was never renewed or republished by him. From 1888, Auguste acted in various functions, including librarian, at the École Française de Musique et de Déclamation, retiring in 1892, as well as acting as secretary of the Association des Artistes Musiciens.

﻿During the time of his publishing activity, Auguste mostly used his business address in official documents (for instance, when he witnessed for births, marriages and deaths in his family, which he did very often). As private addresses I have established 16 rue des Abbesses, Paris (18), around 1872, 5 rue Papillon, Paris (9), around 1879, 90 rue Faubourg Poissonnière, Paris (9), around 1884; and when he died in 1900﻿ he was living with his son at 31 avenue Trudaine, Paris (9).﻿

In the same year as he opened his publishing business, Auguste became a father: his son Gustave (Ernest Jean) O'Kelly was born on 4 October 1872, but Auguste is clearly described in the birth certificate as "non marié" (unmarried). The mother was 25 year old﻿ Juliette Constance Patinier, a  woman 18 years younger than Auguste. Sadly, she died on 5 May 1874, and young Gustave grew up with a step mother, Fanny Victoire Vincent, whom Auguste had married on 3 December 1874. As Fanny O'Kelly she died in the eastern Paris suburb of Saint Mandé﻿ on 29 April 1901, about 14 months after her husband. 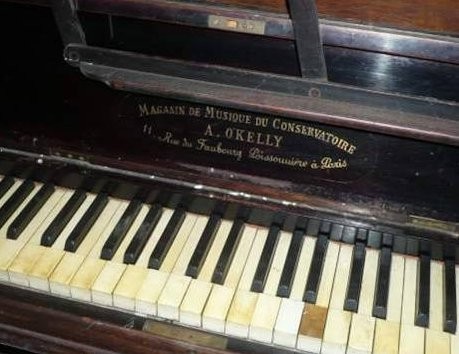