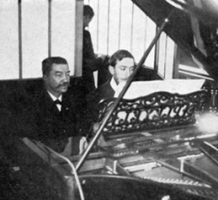 In various sources he is also sometimes called Joseph, Henri, Henry, Henri-Joseph and Joseph Henri. His official name was Joseph Pierre Henri O'Kelly. I have seen signatures in his own hand signing as Henri or as Henry.

Henri was the second child (first son) of composer and pianist Joseph (Toussaint) O'Kelly (1828-1885) from his first marriage (1856) with Rosalie Françoise Henriette Gobert.

He married the pianist Françoise Marie Clotilde Vacher, 20 March 1881. Curiously, this happened a few weeks after she gave birth to their son, Henri (Jean François) O'Kelly (b Paris, 16 Feb. 1881; he became an award-winning double-bass player and died after many years of illnesses in 1922).

Henri was organist and choir master at Saint-Germain-l'Auxerrois, place du Louvre, from 1881 to 1900, and at Saint-Vincent-de Paul from 1900 to 1918. He later taught at the École Rocroy in the 10th arrondissement of Paris.

By 1890, he also worked for Pleyel, Wolff & Cie. (like his father Joseph), but was probably not officially employed. He lived first at 61, rue Condorcet (Paris 9), but mostly at 70, rue du Faubourg Poissonnière (Paris 10).

For some years he edited and recorded music for pianola rolls (‘Pleyela') published by Pleyel, some of them together with Alexandre Angot (see picture above). They were most likely produced between c.1907 and 1923. In 1931 he became a Chevalier de la Legion d'Honneur. He died in Cannes at the Villa Montmorency (then a private school for Americans) and was buried in Paris on the Cimetière de Passy.