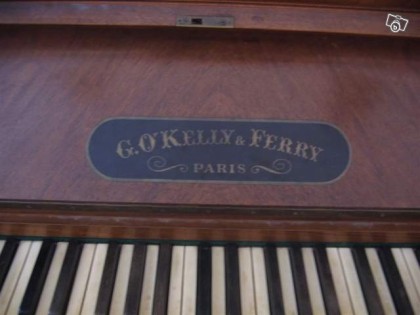 Part of a piano made by Gustave O'Kelly and his partner

Gustave (Ernest Jean) O'Kelly was the only child of Auguste O'Kelly, the music publisher and piano dealer, and Juliette Constance Patinier (1847-1874) with whom Auguste was not married. So far, nothing is known about his early life and education. He took over a piano manufacturing business in 1898 with an address at 93, rue Richelieu, Paris. The business had already been founded in 1830. From September 1901 to at least 1913 he shared this with a partner called Ferry, branding as "G. O'Kelly & Ferry". Advertisements for this business clarify that he also sold pianos by Erard, Gaveau and Pleyel. The shop must have been a large one because he advertised having 200 pianos in stock. It is not clear for how long exactly this business was active. A new proprietor is not named before 1922.

The name of Gustave O'Kelly frequently appears in relation to the Association des Artistes Musiciens for which he acted in various committee functions for many years. The earliest record I have found is a 1905 announcement in Le Tout-theatre where he is listed as one of the vice-presidents and as archivist. Similar announcements can be found in papers like Le Ménestrel, Le Monde Artiste, and other periodicals until 1936. His death is recorded by Le Figaro on Wednesday, 1 September 1937.

Since Gustave's mother died before the boy was two years of age, he grew up with his father and step-mother Fanny Victoire Vincent (1827-1901) whom Auguste had married seven months later in December 1874. Gustave most likely learned his trade from Auguste. He married his cousin Edith O'Kelly (1876-1956) in July 1898, the same year as the start of his business. Edith was born in Boulogne-sur-mer, the daughter of Auguste's brother in Boulogne-sur-mer, Charles Frédéric O'Kelly. At his marriage, Gustave lived at 170, boulevard de Magenta in the 10th arrondissement of Paris. By 1900, when his father died, his address was recorded as 31, avenue Trudaine in Paris 9. I didn't find any record of Gustave and Edith having children, and perhaps this was not possible because they were cousins. So, most likely, the family line of Auguste died with Gustave. Maybe, too, the couple separated (at least for a while) because around 1930 Edith lived again in Boulogne-sur-mer. However, Edith died in Paris on 20 November 1956.