On this website I am giving insights into my musicological activities – mainly devoted to the research of Irish musical history. I am active in this area since my academic year in Dublin, way back in 1987–8.

Another field of interest which is regaining significance for me is the history of the classical guitar – my instrument for some 40 years now. In fact, my very first academic articles in the early 1990s were devoted to the guitar.

Have a look around - and if you have a question let me know.

Last 5 updates (scroll down for NEWS)

26 November 2022: Details of an article just published about Alicia Adelaide Needham (1863–1945) and of a new presentation of my current book project.

2 July 2022: I updated a few things in the academic papers and publications sections of the website. And I changed the photograph below for a better and more focused one.

12 May 2022: I've made a number of small updates, among other things relating to the Honorary Doctorate I received last week from the National University of Ireland; see also image below and news item still further below.

5 April 2022: I've added dates of two conference presentations I will be giving this summer, one in Helsinki, one in Venice; see more. Also an interesting piece of news below (under the picture), more about which later. 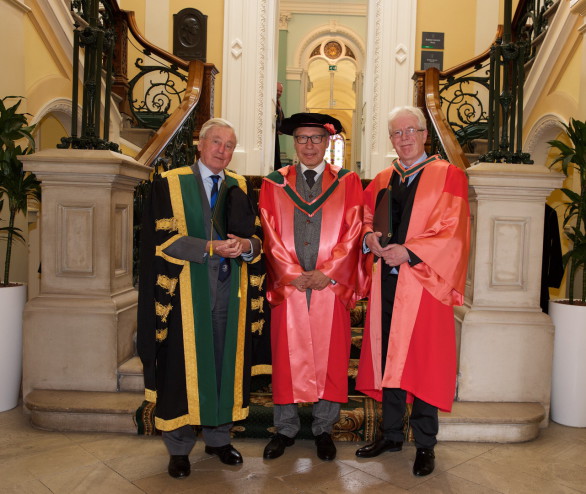 Dublin, 5 May 2022: I received an Honorary Doctorate in Music / DMus (h.c.) from the National University of Ireland (NUI). Image shows me in the middle with Dr Maurice Manning (Chancellor of NUI) and my introducer, Professor Harry White MRIA (Chair of Music, University College Dublin).

May 2022: Deeply humbled but proud about receiving the DMus (h.c.) from the NUI, honouring my 35 years of studying Irish art music (see picture above). Professor White's introduction on this occasion is here (pdf opens).

April 2022: The National University of Ireland (NUI) is awarding me a Doctor of Music honoris causa (DMus h.c.). The ceremony is on Thursday, 5 May, in Dublin. More details to follow.

November 2021: I received an honorary "Dyplom" from the Murovisation Foundation in Poland, "for outstanding musical, cultural and organizational activities, as well as for building important international bonds on the musical level".

September 2021: I went to Poznan in Poland to witness the recordings of the next CD with music by Swan Hennessy, with Marcin Murawski (viola) and Hanna Holeksa (piano). Fantastic musicians, and a recording worth looking out for.

July 2020: I am the co-producer of a CD with selected music for piano by Swan Hennessy – all world premiere recordings! It has been recorded 3–5 July by Moritz Ernst and will be published later this year (hopefully) on the Perfect Noise label.

November 2019: My book Bird of Time. The Music of Swan Hennessy (Mainz: Schott, 2019) will be launched by Professor Harry White MRIA at the Alliance Française, Dublin, 6 November, see here.

April 2019: As part of my uncovering of the music of Swan Hennessy (1866–1929), the first ever release of a CD devoted to his music has just occurred: His complete string quartets and a 1921 string trio have appeared on RTÉ lyric fm CD 159, performed by the RTÉ ConTempo Quartet. My job(s): researching Hennessy and the music, convincing the musicians to try it, convincing RTÉ to invest in it, writing the booklet notes.

September 2018: I am giving a Musicology Seminar at University College Dublin (UCD) on 20 September.

June 2018: Returned from a few days in southern Normandy (France) where I saw (and received on loan) a number of further manuscripts, prints, photographs, etc. of Swan Hennessy that are in a country house of the family. It is a privilege to work with such material.

July 2017: I seem to be increasingly in demand for writing programme notes to concerts and liner notes for CD booklets. I just finished notes for string quartets by Ina Boyle (1934) and Brian Boydell (1949) for the next season of the RTÉ ConTempo Quartet. And just appeared is a CD with chamber music by Rhona Clarke (b. 1958) (Métier MSV 28561) to which I wrote an introductory essay. Next up is an essay on 'Celticism in Irish Opera' for the programme booklet to the concert performance of Robert O'Dwyer's opera 'Eithne' (1909) in Dublin on 14 October 2017.

August 2016: I wrote programme notes for eight concerts in week 1 of the three week festival 'Composing the Island' in the National Concert Hall, Dublin, in September.

November 2015: I was elected a Corresponding Member of the Society for Musicology in Ireland.

April 2015: I was made a Research Associate of the Research Foundation for Music in Ireland, housed at the DIT Conservatory of Music and Drama, Dublin.

September 2014: My O'Kelly book was featured in the blog of the American Musicological Society where it was welcomed for its "newfangled, dare we suggest paradigmatic?, ways Klein's book was researched and published". See for yourself here.

May 2014: My new book has appeared in print and as an e-book: O'Kelly - An Irish Musical Family in Nineteenth-Century France (Norderstedt: BoD, 2014).

January 2013: A 6-part broadcast series at Irish radio station RTÉ Lyric FM called "Women of Note" is downloadable from the station's website. It was broadcast between September and December 2012. You can hear me in each of the six parts, as I was interviewed for it last year in Frankfurt.

November 2012: Received a rare copy of the very first piano composition by George O'Kelly, the Nocturne from Deux Pensées Charactéristiques published 1853 in Boulogne-sur-mer (from the antiquarian dealer Paul van Kuik).

September 2012: I was the first musicologist to have looked through the sheet music collection of the Princess Grace Irish Library in Monaco. In this capacity I was asked to write a short assessment of the collection to be archived together with the music.﻿