My project for 2022 and 2023: This is going to be a 'popular' history of Irish classical music. It will have about 250 to 280 pages, richly illustrated, written in a non-academic style and intended for everyone in Ireland who enjoys listening to 'classical' music (and I consciously use that term, because audiences do as well) - from the concert-goers of the National Concert Hall to Feis Ceoil participants (and their parents). Structure and contents are fixed, I've finished the introduction and the first of eight chapters, and I am in touch with a publisher.

I am gathering material for a biography of this Anglo-Irish composer (1882–1957), a composition student of Charles V. Stanford at the Royal College of Music, London, who settled in Ireland around 1910. He gained a measure of popularity in the early 1980s when his remarkable song settings of poems by James Joyce were rediscovered. However, there is more to his story than the connection to Joyce (who favoured his settings more than anyone else's) as he was also an ambitious opera composer. I found diaries by him for the years 1901–1907 providing a unique insight into his early career.

Bird of Time. The Music of Swan Hennessy 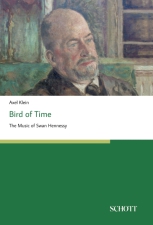 This is the first ever biography of (Edward) Swan Hennessy (1866–1929), an Irish-American composer who came to live in Paris from around 1903. Born in Rockford, Illinois, he grew up in Chicago, studied at the conservatory of music in Stuttgart, Germany, lived in various places across Europe, finally settling in the most vibrant musical metropolis of the time. Here he became influenced by the French Impressionists and tried to adapt his work to his musical environment as best as he could – or, perhaps, insofar as this was allowable. From 1912 – and especially after World War I – he realised his true mission: as a member of a group of Celticist Breton composers, he built upon his Irish heritage and henceforth wrote in a uniquely ‘Celtic’ style, fusing characteristics of Irish traditional music with the art music of his time.

This book describes the careers and the music of four generations of Irish musicians in 19th and early 20th-century France. It is a fascinating story of hopes and disappointments, successes and failures, musical talent and tastes, as this family integrated more and more into French society. The book collects documentary evidence about all members of the family with numerous music examples and other illustrations. It is not only a study of the prototype minor composer in one of Europe's musical capitals, but also discusses issues of identity, change, aesthetics and Irishness in exile. It is a contribution to both French and Irish musical history.

The book can be ordered in a printed format or as an e-book. I personally recommend the printed copy, mainly because the more than a hundred illustrations (music examples etc) should come across better in this format.

– Blog of the American Musicological Society, September 2014; "All by myself".

The Life and Music of Brian Boydell

Brian Boydell (1917-2000) was one of the most significant Irish composers of the twentieth century. This book paints a picture of the man and musician, discusses the main characteristics of his compositional technique, consides his legacy as a historical musicologist, and catalogues his works and writings. With contributions by the editors as well as Harry White and Hazel Farrell.

This seventh volume in the Irish Musical Studies Series examines the development of art music in Ireland from different perspectives. The book includes historical assessments of genre in Irish music, analyses of individual composers and compositions, and essays in cultural history.

Though the term Irish music typically evokes images of fiddles, flutes, and Riverdance, Ireland and its culture have also given rise to a wealth of classical music, including compositions ranging from string quartets via orchestral music to operas. In this important work, author Axel Klein provides much more than a mere discography: he documents and promotes a largely unknown aspect of Irish culture in a unique combination of discographical and biographical information. Featuring ninety-three recorded Irish composers and forty-three international composers influenced by Irish music, the volume offers the means for scholars and general readers alike to familiarize themselves with a subject to which most of the world, until now, has not been exposed. As most of the music described is currently available on compact disc, Klein's compilation serves as an invaluable resource guide for both academics and amateur enthusiasts. 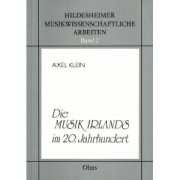 by Axel Klein (in German)

This was the first study, in any language, of the history of Irish art music in in the twentieth century. The book (a version of the author's Ph.D. dissertation of 1995) describes, in chronological order, representative works of different genres and places them in the context of Irish cultural history and international musical development. The study also included the biographies and aesthetics of 76 composers. Appendices include a bibliography, discography, and biographical index.