Swan Hennessy: A Composer to Rediscover 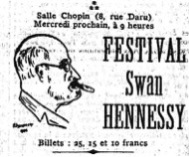 (Edward) Swan Hennessy, whose 150th birthday falls on 24 November 2016, was an Irish-American, Paris-based composer. Born 1866 in Rockford, Illinois, he grew up in Chicago and left the United States via New York in 1878, aged 12, for a public school education in Oxford. His father was Michael David Hennessy (1837–1919), born in Cork, who emigrated to Canada as a fifteen-year old after desperate Famine years in Ireland and made a fortune in Chicago as President of the Chicago City Railways (until early 1874), a lawyer (until c.1889) and as a lucky stock investor. The composer’s mother was Sarah J. Swan, hence the artist name ‘Swan’ – in an 1870 Chicago census, the young boy already appears as ‘Swan’ only.

Hennessy did not stay long in Oxford, probably not more than a year. “Music drew me”, he said in a 1929 interview in Le Guide du concert, and he went to study piano and composition at the Stuttgart Conservatory, which at the time had a good reputation particularly among American and British musicians. His piano teacher was Edmund Alwens (c.1832–1897) and in composition he was a pupil of Percy Goetschius (1853–1943), the teacher of composers as diverse as Howard Hanson and Henry Cowell (these not at Stuttgart, though). Hennessy spent seven years at Stuttgart, probably the years 1879 to 1886, first in the ‘Dilettantenschule’ (for the younger, non-professional students) and from 1881 at the actual Conservatory. His earliest compositions were published from 1884 in Germany.

From 1886 he first settled in London and married the descendant of an Anglo-Irish land-owning family in Edinburgh in late 1888. The marriage did not prove successful. Although two children were born in 1890 and 1891, a divorce was filed in 1892 and granted in 1893. It left scars in his career: he did not compose anything for more than ten years.

From about 1903, he settled in Paris, the place he once described as “the only place in the world where life is easy and agreeable”. Here he was at the centre of musical development, and although he never fully shook off the influence of German romanticism, he opened himself up for influences of the French impressionists. He found a regular publisher in Eugène Demets, who also published Ravel and Satie and, like Satie, developed a humoristic vein at exactly the same time – with the difference that Satie’s became well-known and Hennessy’s is forgotten. Hennessy’s original piano music, in particular of the period from about 1907 to 1913, most certainly deserves rediscovery.

Hennessy and his family, re-joined by his father, went into exile in Switzerland during World War I and did not return before Michael D. Hennessy had died there in August 1919. Again, he hardly composed anything for five years – a second ‘gap’ in his career’ – , and when he returned his output focused on his own brand of musical Celticism. For his last ten years, he mainly composed chamber music, and most of this comes with epithets like ‘celtique’, ‘irlandais’, or ‘gaélique’. In these works he rarely uses traditional music, but recreates typical melodic curves of Irish or Breton traditional music. For Hennessy, this type of repertoire was a welcome solution to the problem of contemporary harmony. He was an outspoken opponent of Arnold Schoenberg and his principles, often on the brink of polemics, but always emphasising the importance of nature and human emotions which he sought to emulate in his music and which he missed in the avant-garde of his time. Identifying with his Irish heritage, and joining a group of like-minded Breton composers in Paris, this became a stylistic guidance as well as an emotional identity.

Hennessy, who was friendly with Ravel, Roussel and Gershwin, but mainly mixed with Breton composers like Guy Ropartz, Maurice Duhamel, Paul Le Flem, Paul Ladmirault, Louis Vuillemin, etc., was quite well-known in the Paris of his time – frequently performed and broadcast, also for about ten years after his unexpected death on 26 October 1929. Then came the next World War, and with it, he fell into oblivion and has not been rediscovered since, except for some of his chamber music.

Why is Swan Hennessy so forgotten today? One of the reasons is that he never composed any large-scale music: he never wrote anything requiring more than five performers (no orchestral music, no operas, etc.). Another reason certainly is that he did not create headlines as a modernist, which seems to have been a prerequisite for reputation after 1950. Finally, he was never claimed as one of their own in either France, the United States or Ireland. He lived in France, but was not French. He was born in the USA, but did not spend any of his adult years there. He identified with Ireland, but was not part of the musical scene there either (although during the 1920s he was much better known there than today). He was a truly global citizen with music of both French and Irish interest, with a repertoire that is waiting for singers, pianists and chamber musicians to explore.